So after sitting down and deciding that we wouldn't take on another pup in the near future I promptly went out and got a longhaired Weimaraner puppy. 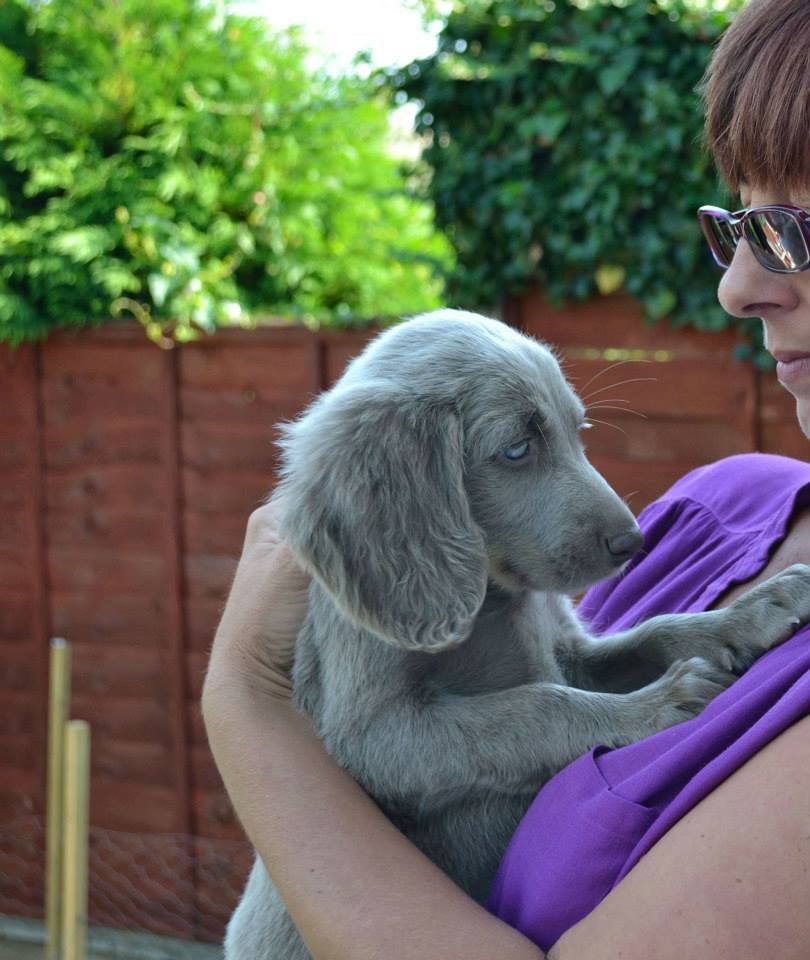 It seemed like fate when I saw the pictures of her on a friends time line and then our fun day was cancelled because of the flooding and I actually managed to convince Jim that it was the right decision as well!
Ehren joined out little family on Monday 26th August 2013 and I was totally smitten.  She is a lovely, balanced and brave little girl and seemed to wander in here like she owned the place.  The others have taken to her really well but we have had a bit of a journey so far.
On Tuesday morning I noticed that after Ehren had eaten, she went up on her tip toes and lost all co-ordination, I thought it was the shock of wading through one of Colin's monster morning pee's.  Gave her a cuddle and popped her in her bed for a little while and she seemed fine.
Jim took her to work as I had a job to go out to and he fed her mid morning and the same thing happened, only worse, she was totally unable to stand and then began to limp afterwards.  We thought that I had over fed her and she had wind or something.
This went on after every feed so she was due for a vet check and her first jab so on Wednesday so got the earliest appointment I could and took her food with me so the vet could see exactly what happens after she has eaten.  They were quite shocked and concerned and suggested that we see a specialist immediately.  Our vet called the specialist and as she was only in Corringham she said she would pop over and have a look.  She ruled out a shunt but felt there was definitely something serious wrong and referred us to another specialist the next day.
Me being me had to ask questions and the answers I got were really worrying and heart breaking.  She had only been with us a couple of days but she had already stolen our hearts and I know in these sort of scenarios the best course of action is to return a sickly pup to the breeder but I could no more return her than give one of the others away.
When I spoke to the breeder she had noticed similar behaviour in one of the other bitch pups in the litter and took her off to the vet, she didn't feed her pup at the vet and it was the little runt of the litter and her vet suggested a change of food would solve the problem.  When I explained what our vet had said she was very concerned.
Ehren's fourth day with us was spent at another specialists being poked, prodded and pulled about.  Having more bloods done and still no answers.  A few things were categorically ruled out but no firm diagnosis so we still didn't know if Ehren would survive, if she would die in her sleep or what was going to happen.
The other bitch puppy that the breeder still had came down with the same symptoms so now all 3 of the bitches were affected but still none of the dogs.
We had medication for Ehren and started feeding her every 2-3 hours so try and alleviate the symptoms a bit.
Saturday night we ended up at the emergency vets as the poor little one hadn't poo'd in 24 hours and was in some real distress.  She had to suffer the indignity and discomfort of a finger up her bum to help her.
Sunday was our fun day and Ehren seemed brighter and the symptoms after feeding were definitely getting shorter.  By Sunday night we had a normal puppy, no signs of the co-ordination problems, no falling over and happy and playful but she still wasn't pooing.
Normal puppies eat, pee, poo, play and sleep.  It should be like clockwork, what goes in must come out in waste products and energy but that wasn't happening so Monday afternoon I had another chat with the vet and she is now on a laxative as well as her meds. 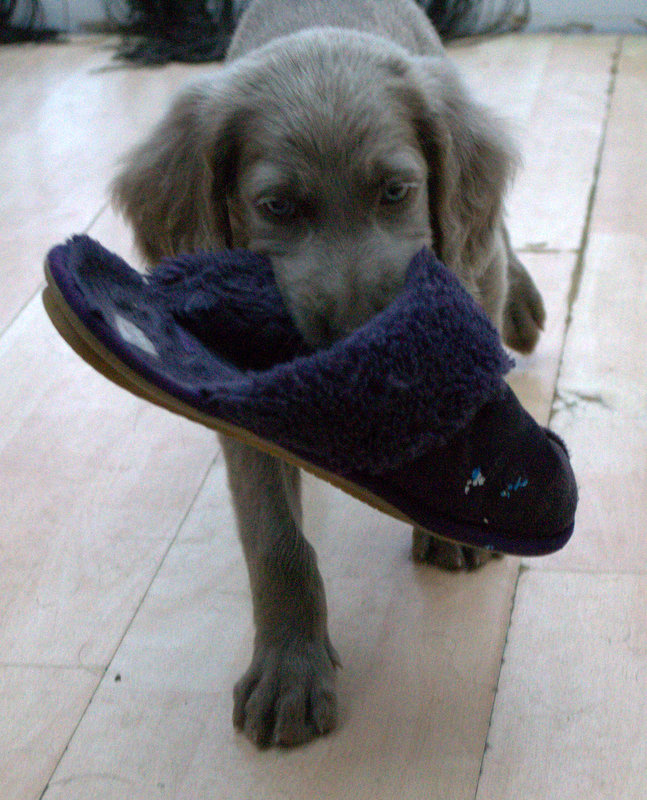 The blood results for her are very concerning as she has incredibly low white cell and globulin counts which means she has no immune system.  The vets and the specialists are baffled as to why and it is now a waiting game to see if anything else comes up from other blood tests and if after the medications the symptoms return and the blood counts level out.  They do not think it is an infection because none of the dog puppies have been affected so they still think it is something that they have developed in vetro (in the womb).  Time will tell but at the moment she is a normal, happy and very naughty puppy.
As someone who earns a living telling new puppy owners how to behave around their puppies my friend has suggested that I fill you in with the problems that I have with Ehren and how I get over them.  It has been 9 years since I had a pup as young as Ehren and I truly had forgotten how time consuming and how much hard work it was.
So now that I have filled you in on the Ehren's background I will share my puppy raising problems and tips.
More tomorrow on how we are dealing with her biting and her tantrums at bed time.