Ehren Update - dealing with the playbiting

Morning all,
I know you have been waiting for the next instalment but I had a brain freeze and couldn't log in to my blog account.  Hopefully that has now been resolved and I won't have problems in the future.  I am dog trainer not a tech wizard and find many things technical beyond my understanding.

I have changed the spelling of our pups name for those who missed it - Ehren means Enlightened, mountain of strength and she really is.  She has been symptom free since last Sunday and has gained a kilo this week so we are hopeful that recovery is on the cards.  She finished her medication Friday and will go back to the vets next week for more blood tests to see if her counts have levelled out and she can be vaccinated.  We still have no diagnosis of what was wrong which is concerning but at least she is better.

One of my team expressed their disappointment in me buying a sick puppy but until Ehren had something to eat there was nothing to cause any concern.  Jim and I went on the Sunday to check out the litter and I went back on the Monday to see her again with a friend who has more knowledge of 'shape' than I do, none of us saw anything concerning until Ehren was fed.  I would say to you all that I did make a mistake as I purchased a puppy without insurance and from a breeder who had no idea about anything.  My knowledge has helped in a lot of ways because as soon as we saw something was wrong I was at the vets and because of my relationship with my vet they didn't mess around, we saw a specialist the same day.  Without that knowledge it is quite feasible that Ehren and her 2 affected litter sisters would have died but it never helped us avert the upset we have been through the past couple of weeks and the battle I now have to get recompense from the breeder.

Anyone who is thinking of buying a puppy should be sure that they come with free insurance that the breeder should activate when you collect them, they should also come with clear information sheets about feeding and worming routine to date and from a breeder that has a care for the pups and not the cash.  I have perpetuated the cashing in on the sale of pups which I am ashamed of and though not puppy farming its not really much better when all they were concerned about was making money.

If you are looking for a pedigree puppy then go through the breed clubs, not the KC Puppy Finder site as I did and if in any doubt walk away because once that puppy is in your arms and out the door then they are yours and though good sense says you should return them, your heart won't allow it.

In herself for the most part Ehren is a normal, naughty puppy who plays and runs around and falls over and generally loves life.  Not knowing what was happening has been traumatic all round and because of this Ehren has turned into a bit of a brat.  She has been spoilt already with time and attention not only because we were watching her constantly for signs of pain or collapse or even to see if she was still breathing but we were working on her housetraining and looking for signs that she needed to 'go'.

Ehren is a very bitey puppy.  She has the eyes of an angel but the lock of a pitbull and when she is in one of her moods it has been difficult to manage.  Some of it I have put down to the fact that she has been in pain with whatever has been going on with her (I am a new puppy mummy after all and have to make excuses for her behaviour) but some of it I put down to the fact that she is a puppy with no idea about bite inhibition.

Now, I tell all you new puppy owners to find a noise and a pitch that interrupts the behaviour and to praise the puppy when they let go.  Ehren has had other ideas about this even though I keep reminding her that this is how Mummy makes her living and it would be helpful if she would comply!  We have resorted to giving her a toy and leaving the room or putting her in her crate for a little down time when she gets really over the top.  Her biting is getting better very slowly and there are just a few times a day when it is really bad such as when we first get up in the morning (she hasn't seen us all night) and when she has been left for a while, which of course to any puppy feels like days even though she has the other dogs with her.  I am going with a bit of ignoring at these times and just walk with her into the garden so she can do her business and this seems to temper it a bit and lets the initial over-excitement die down a little. 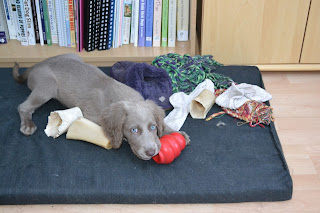 Whilst I am battling with the biting and my arms currently look like I have taken to self-harming, she is clean as a whistle and asks to go in the garden and has done since day 2 of being with us.  I have no accidents in the house and I know in a way I am luckier than most as I have time to spend with her and a very small house but it is vigilance and persistence that has also ensured I am not mopping up puppy pee every 5 minutes.

We have adhered to my mantra of taking her in the garden as soon as she wakes up, when she has been fed and when she has been playing and any time in between that we think there is a chance she will pee or poop and we have waited with her to see if she will go.  I am covered in gnat bites from the night time garden visits but I have a puppy that is clean indoors.  As soon as she squats down to do her business we give a verbal command of 'wee wee's and lots of verbal praise when she has finished and she is well on her way to squeezing out the littlest pee on command.  At least she read the part of my booklet about housetraining and I don't need to re-write that!